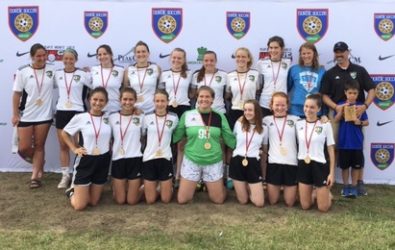 The Addison UNITED came together in 1994 to offer an opportunity for some players from Bristol, Middlebury, and Vergennes who wanted to play more soccer than just in the fall season. From the very beginning, coaches that wished to help the young players continue to develop their soccer skills have been a hallmark of the club. Playing in the fledgling Vermont Soccer League, which also was in its early years of development, offered the pioneering Addison United youth the opportunity to play in a spring league.

Since then, Addison UNITED has grown into one of the largest clubs in Vermont. With players proudly representing many of the towns in Addison County, Addison UNITED fields teams of boys and girls as young as age six and into the college years, we’ve stayed true to our roots as a family-based community club built on the love of soccer. We have great players, committed and talented coaches, dedicated team managers, a diligent board, and wonderfully supportive families.

Our ultimate goal is to develop creative, skillful players capable of playing at the highest level. Our most top priority is performance and personal growth. We win plenty of games, but not at the expense of learning, growing, and developing as players, as teams, and as young people. As a community-based club, we take the opportunity to get to know every player on a personal level. We want players and parents to have fun and to feel welcomed and valued, and to foster an atmosphere of openness and approachability.

We believe in what we do and feel that players should choose their club soccer experience without pressure, persuasion, or big promises.

Our season starts in January with Sunday practices for our players U12 and up. We move outdoors in late April or early May for our spring season, with training at least twice a week. Our Vermont Soccer League matches start the first weekend in May and go through the middle of June. Typically, we play one game a weekend. Our teams also enter one or more tournaments, as additional competitive opportunities.

As a Board of Directors, Coaching Staff, and a team of committed volunteers, we are here to mentor, guide, teach, and support our young players.

The Addison UNITED Soccer Club (AUSC) is a nonprofit organization.  Sponsorships, gifts, or donations to the club are tax-deductible and promote the health, welfare, and recreation of the general public through the sport of soccer.  Support the Club